I was actually on my way to Düsseldorf in 1980 to meet up with Andy Warhol and Fred Hughes for Andy's show. I got it in my head to stop off in Berlin beforehand to see my friend Richard Jackson, who was there working at DAAD. Richard asked if I wanted to go out to dinner with the Kienholzes that night, and of course I said yes. I had never met them, but had grown up with the work. We went to a cozy, casual, Italian place, and I immediately liked them. Nancy's very smart, straightforward and friendly; Ed was sort of scary looking--really big, and kind of imposing, but also very friendly and nice to me, and he obviously liked Richard too, so it was fun and easygoing. We laughed and drank (and drank) and had a great time. Sometime during the course of the evening I noticed that Nancy was really checking me out--looking at me intensely and carefully. Suddenly she said to Ed, "I think Dagny'd be good--big hips, no shovels." I didn't understand what she meant at all. Ed responded, "Yeah, you're right," and then proceeded to explain their idea for a sculpture using the Playboy pinball machine. Ed had watched some young guys playing pinball on this machine, and all the pelvic action that accompanied the attempts to get the little ball to go in the right direction. The machine had the typical sort of vulgar images of Playboy Bunnies on it, and Ed had realized that the young players were, in effect, fucking the Bunnies on the screen in front of them. He wanted to do a piece about the subtle ways women are portrayed as objects, and how young men learn to use and abuse them. Nancy then commented casually that they had asked every model and whore they knew in Berlin to pose, but none had been quite right. I was perfect. "Shovels" means bulging thighs, like what I always called "saddlebags." I had flat thighs, but wide hips that would fit the pinball machine. Would I pose for them? Tonight? Richard Jackson almost fainted. He said, "Dagny, maybe you'd better think about this and call Nancy and Ed in the morning." But I was leaving for Düsseldorf. Richard went home, and I went off with Ed and Nancy to their studio.
The studio was big and open and full of books and stuff. Someone else was there (Ed's son?), and Ed told me to go to the bathroom, take off my clothes, and put on the robe that was there. I did this, and returned to the big room, whereupon I was handed a triangular piece of cloth and an ENORMOUS jar of Vasoline. I was instructed to spread the Vasoline thickly over my pubic area and then stick the cloth over that. So I did. There was a table and some wooden chairs arranged near another big table, and Nancy asked me to get up on the table, lay back and put one leg up on the back of one of the chairs and my other foot on the seat of the second chair. For some reason, this was not weird or embarrassing--Nancy and Ed were completely pro about all the adjusting of my legs, my arm, my body, and made sure I was comfortable and at ease. I was, actually. Then they described how the cast would be made--a thin, warm oil was spread all over my lower body, and strips of plaster cloth (like they use to make a cast for a broken leg) were smoothed over my legs and crotch. It felt great! All that warm oil and massaging! Nancy was taking a bunch of pictures. Shortly, the plaster started to set up, and it was only then that it occurred to me that I couldn't move. I was completely in a cast, from my hips down, on my back, legs spread, in the middle of the night, somewhere in Berlin. Still, I wasn't freaked out--just finally questioning what I had got myself into (a bit late for this question, I must say now). Assured that the cast would be dry enough to remove in a little while, Ed, Nancy, the assistant and I all sat (well, I was not actually sitting...) around and had something to drink and chatted till it was ready. There was a kind of narrow slit on the bottom of the cast, running all the way down the back of my legs. Ed and Nancy explained that the cast would just sort of come off when it was pulled. My eyes widened. Suddenly I realized why all the Vasoline and oil. I was about to have the most amazing body wax!! Ed and the assistant stood on either side of me, put their fingers in the slit, and pulled the cast up... ouch... and ...pop! ...off. It was an incredible feeling. There I was, starkers, having just been cast for The Bronze Pinball Machine With Woman Affixed Also. It was late, Ed drove me home, and I didn't hear from them after that. 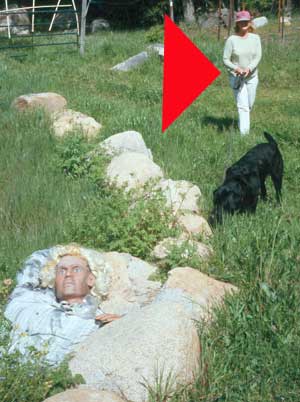